Home » Here are some occasional news items. Follow us on twitter for latest news @wearenorthpark » Uncategorized » What I love about North Park

There are many things to like about North Park… It’s close to all amenities downtown, but has a quiet residential neighbourhood feel. It also has several of my favourite spots in Victoria for coffee and local eats. But, by far, my favourite thing about living in North Park is the events our neighbourhood hosts. No matter what time of year it is, there is always something going on in North Park.

Starting in September, the WHL’s Victoria Royals begin their 7 month season at Save on Foods Memorial Centre showcasing some of the world’s next top-tier hockey talent. Royals games are some of the best attended contests in the WHL, bringing in around 4,900 fans a game and are sold out shows during the playoffs. If you ever get a chance to see a Royals playoff game, do it; even if you’re not a hockey fan, the atmosphere alone is totally worth it. The best hockey being played on Vancouver Island is within walking distance in North Park, and is my favourite way to spend a winter night with a few friends.

By the summer though, I’m ready to get outside and enjoy the fairer months in Victoria… and is there better way to accomplish this than taking in a Victoria Harbourcats game? The Harbourcats play in the West Coast League, which is one of the premier collegiate summer leagues in the North America and some of the best baseball available in the Province. Located in picturesque Royal Athletic Park, an evening of baseball, warm summer breezes, some truck food from Floyd’s Diner, and chilly beers from Spinnakers is a perfect July evening to me.

Not to be pigeon-holed as the neighbourhood with the best sports venues in Victoria, North Park is also home to some of the more notable cultural events in the city too. Victoria’s biggest music festival, Rifflandia, also calls Royal Athletic Park home and is a three day festival which brings in a real eclectic group of artists every year. To date, Rifflandia has seen Jurassic 5, Wolf Parade, Modest Mouse, and Death Cab for Cutie come through the neighborhood… but the best part is discovering music you’ve never heard before!

Victoria’s Beerfest, my other favourite event in North Park, is also a Royal Athletic Park and usually happens a couple of weeks following Rifflandia. It feels like the whole city comes out to taste some of the best craft beers brewed on the west coast (and beyond), and is a great way to have a drink and a laugh with total strangers.

The biggest musical acts to visit the Island can also be found at Save on Foods Memorial Centre… Elton John, the Tragically Hip, Stone Temple Pilots, Snoop Dogg, Rod Stewart, and Queens of the Stone Age have all played in North Park!

There is no neighbourhood in Victoria that can boast the entertainment that North Park can… and that’s why I love living here. 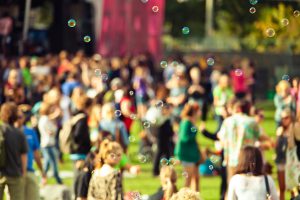